Barcelona, 09 March 2017: uCloudlink exhibited at Mobile World Congress in Barcelona from 27 February - 02 March. It was a fantastic show and there were meetings on stand with both current and new customers from all around the world. Mr Tan, uCloudlink’s CMO, also had multiple media briefings on the stand, where he demonstrated the new product launches. Media that attended included PC Mag from the USA, Techbang.com from Hong Kong(China) and Les Echos from France. 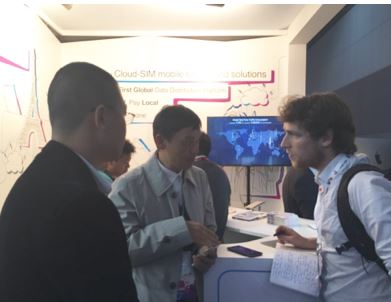 The GlocalMe G3 was also launched at the show – the slim and sophisticated portable Wi-Fi device offers users global roaming at a price that is both affordable and competitive.The GlocalMe G3 is also the first device from the company that offers Localised Based Advertising, which appealed to our rental customers.  The device will launch in Q2 this year.

Many thanks to everyone who took the time to visit our stand in Barcelona!

Previous
uCloudlink’s “Black Tech” Mobile Wi-Fi Shined at MWC Shanghai 2017
Next
MVNO Summit 2016: CMO of uCloudlink was invited to be the guest speaker
Back to list